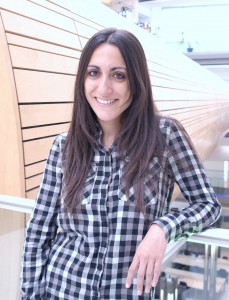 María obtained her BSc degree in Biotechnology at the University of Salamanca, Spain in 2009. After graduation she completed her MSc degree in Neuroscience and Cognition at the University of Navarra. She pursued graduate studies in Neuroscience in the laboratory of Alzheimer’s disease Neurobiology at the Centre for Applied Medical Research (CIMA), University of Navarra. She completed with Distinction her PhD project on ‘AAV-mediated IGF2 overexpression for the treatment of Alzheimer’s disease’ in December 2014. During these studies she gained an EMBO Short-term Fellowship to investigate the role of IGF2 on synaptogenesis and synaptic plasticity at the Institute for Anatomy and Cell Biology, Ulm University (Germany). María joined the Nanomedicine Lab in April 2015 working on carbon nanotube-mediated siRNA gene silencing for the treatment of Parkinson’s disease.